Living in California, we are always worry about earthquakes and the damages after them. Earthquake retrofitting keeps houses and buildings from being displaced from its concrete foundation – making the building safer and less prone to major structural damage during an earthquake. Existing homes need to be retrofitted because the understanding of the effects of earthquakes as well as construction techniques have improved after the homes were built.

The above diagram shows how earthquake forces can affect buildings in 3 ways.

There are many ways to make sure the house is up to safe.

There are many methods available for improving the connection of the framing to the foundation. The choice of which connecting system is most practical for a given house comes down to a host of variables and ultimately includes a judgment on cost effectiveness. Older homes vary widely in their access conditions, framing size and configuration of the foundation, etc., and there is usually not a “single” correct way to improve this connection. 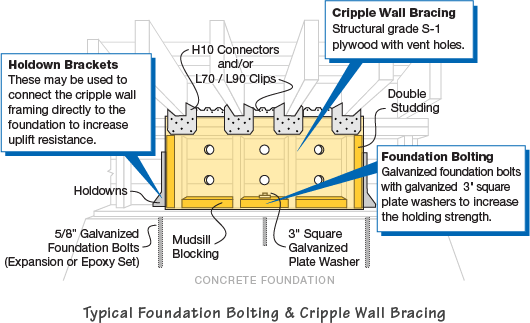 Two of the most common are Simpson Strong-Tie Retrofit Connectors and Angle Iron Struts and Foundation Bolting.